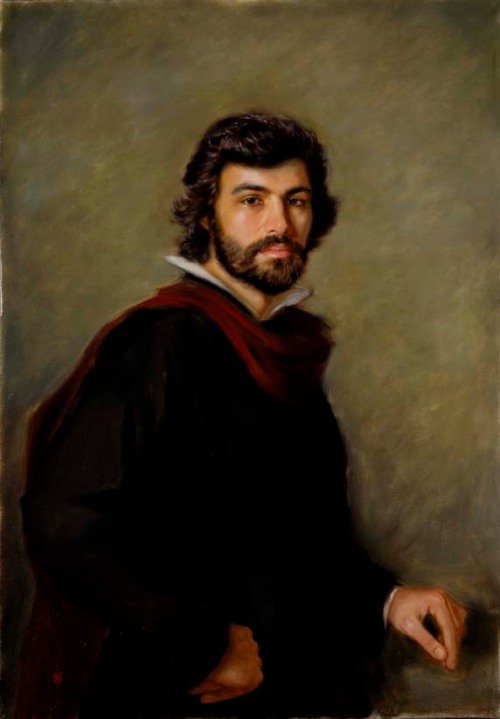 Every once in a while, I like to do something which some consider classical or “academic,” to realign myself in my place in history as simply an artist with much yet to learn. Much of what I know now about painting was self-taught, gained by intense observation of great paintings in person to try to understand how the paintings were created from the very first layers to the final touches. Out of all of the artists I studied, it was Velazquez who “taught” me the most. He revolutionized the process of painting by showing how to paint efficiently and think in terms of mass rather than line, thus making painting easier. The labor of painting was no longer addressed with minute brushes, long awaited glazes or small gradations of tones in color mixing. He learned that the proper mastery of a bristle brush, a distant viewpoint, a limited palette, and calculated paint strokes not only allowed him to paint with more ease and speed, but also created works which seem to breathe in the shadows and glow in the light. This learned ease of painting allowed him to devote more time on developing visionary concepts, composition choices, luminosity and in general on great picture-making. 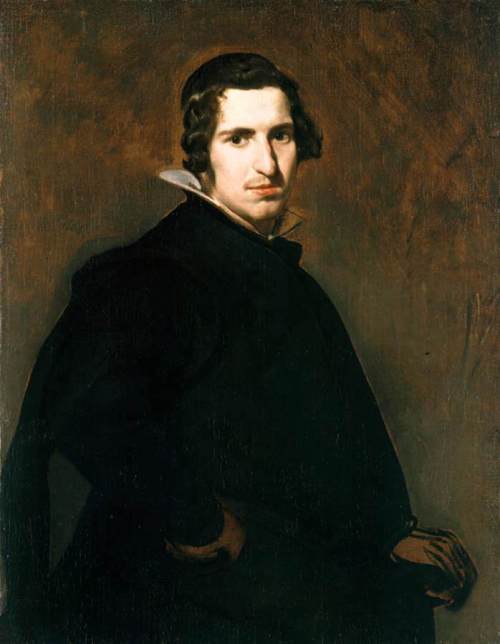 Last year in Florence, I was looking through one of my volumes on Velazquez and I came across this “Portrait of a Young Man.” I was particularly drawn to it because I realized how very much of what I was teaching my students not only came through an understanding and admiration of Velazquez’ painting approach, but that almost all phases of his process and thus also my teaching were present in this painting. I only felt bad that he had not had time to finish the hand. So I thought, why not “copy” this Velazquez but finish the hand? One can learn so much in the process, despite it not being entirely original. Hence my piece up above, done from an amazing model I found in Florence, finishing the hands, adding a greener background, and changing the color of the drape thrown over the shoulder to add a bit of color.

I painted it in the apartment I found in Borgo degli Albizi. I had decided to find a new place to live that allowed me to have my own studio at home with the aching hope to find one with north lit windows, something uncannily difficult to explain to apartment agents. I did a quick search on the internet and came across a number for a suitably sized place, made an appointment, and then went to look at it. It was incredible, the owner opened the doors to an enormous room with a wall of unblocked north lit windows and a bed over to the side. This of course was unbelievable enough and I said I would take it. The owner, however, insisted on trying to convince me more, showing me the view of the duomo from the living room, the balcony, the Morandi etchings on the walls, and the old fireplace kitchen. He then asked if I had ever heard of Pietro Annigoni, and I said of course; this apartment, together with the one upstairs originally, was once the home and studio of Annigoni. The very room where I slept and painted the above painting and others was where Annigoni painted his famous portrait of Queen Elizabeth II of England, an incredible painting which confirmed Annigoni’s place in art history:

Upon moving into the apartment, the owner was excited to tell me that he was convinced that it was my destiny to move in: as he was going through the books left in the apartment by prior guests, he found several postcards and posters from one of my solo exhibitions in Florence. I agreed that it certainly seemed like some sort of a sign, only hoping that I would get along well with Annigoni’s historical presence.

I painted several pieces in this home, including several scenes of the very room where Annigoni’s painting was created, moving furniture and adding quirky elements like these here. Two of the whole “Annigoni” series now belong to the apartment’s owner. 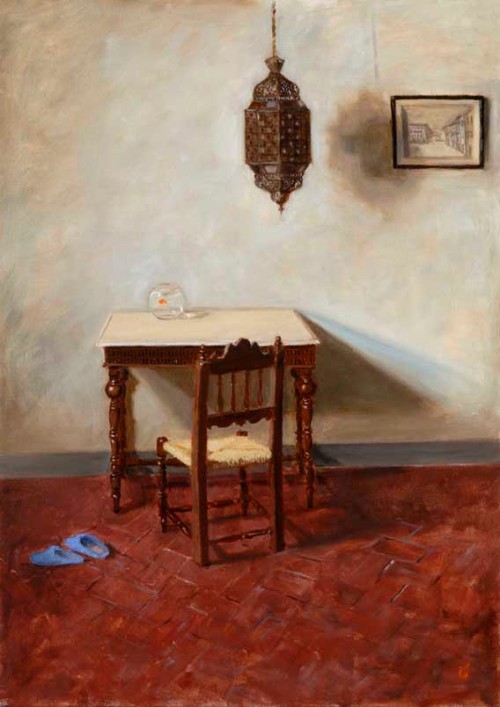 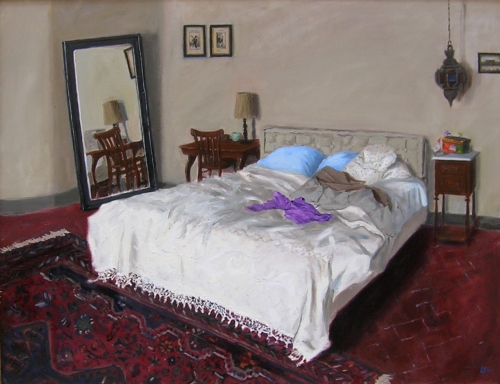 “The Bed and the Box of Unanswered Questions”

While living there, I received a commission to complete a large painting of a Madonna and two saints from a church in southern Italy. Perhaps it is very fitting that I completed the project in Annigoni’s former studio, as he spent several of his last years concentrating on paintings and frescos for various churches around Florence. Though I no longer have the painting, to commemorate the honor of receiving such an assignment, I created this painting for myself as a remembrance piece:

I then received an email from a contact in the US asking me whether I could not meet with Paul Polak, a noted philanthropist who was arriving in Florence to receive an award from the city for his brilliant achievements in reducing worldwide poverty. He has written a book called “Out of Poverty: What Works When Traditional Approaches Fail” which you can learn about on his website. He and his wife came to visit me in my studio in Borgo degli Albizi and it was an absolute delight to get to know them. While looking at my paintings, he remarked on the Velazquez copy I had created, and when I told him the story of the painting, he said, “So the title of the painting is ‘Giving Velazquez a Hand’?” I laughed, saying that was a great name for it, so hence its title now, thanks to Paul.