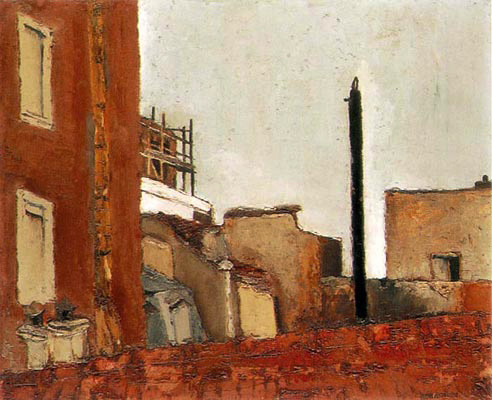 Though relatively unknown today in the art school and painters circles, Fausto Pirandello (1899-1975) is one of my most favorite modern artists, and one I dutifully try to find every time I am in Italy. Pirandello’s approach into different layers of reality, while also focusing on the mundane behind closed doors, strikes deep chords in me. I also appreciate immensely his very original motifs and compositions, as well as his ongoing explorations of the figure and bathers. Son of the dramatist Luigi Pirandello, he trained with the sculptor Sigismondo Lipinsky between 1919 and 1920, before turning to painting. His early work was influenced by Armando Spadini and Felice Carena, colleagues of his, as well as by Gauguin, Kokoschka and van Gogh.

After a four year experience in Paris, where he mingled with some of the more important Italian-Parigian artists of the 1920s and 30s, Pirandello returned to Rome in 1931 and was welcomed into the Roman School, distinguishing himself by his originality and solitary research. Pirandello’s painting was oriented towards a realism of daily life, including the grimy and gritty, and expressing himself through dense painting. His intellectual vision translated the naturalistic facts, even those most brutal, in a sort of magical or poetic realism with archaic and metaphysical tones, adding spatial concerns stemming from cubism, tonalism and expressionistic painting, such as in La Scala, depicting a woman ascending and descending a staircase in a brothel, or in Pioggia D’Oro, with a foreshortened female figure falling out of a domestic scene.

During the 1950s, Pirandello develops his style further, reabsorbing cubist suggestions from Braque and Picasso, and living through the difficult phase afflicting Italian painting at that time, the split between realism and neocubism.  Through expressionistic deformations, he comes up with new solutions that sit between abstraction and figuration, with paintings that refer strongly towards a cubist synthesis in the tiling of colors and in compositions which slowly lose their narrative.

Pirandello exhibited widely during his career, including the Venice Biennale and the Rome Quadriennali, along with solo exhibitions at the Galleria della Cometa, Galleria del Secolo, and Galleria di Roma.  After the war, he held a solo exhibition at the Catherine Viviano Gallery in New York in 1955, and the solo show “Nuova Pesa” (New Weight) in Rome in 1968.