Napoli. Che meraviglia is pretty much all I have to say so far since my arrival. Now that I am feeling a little more settled and have learned my way around in a general way, I am looking forward to exploring all the nooks and crannies – being careful of course when venturing down dark alleys by myself. I have begun painting as well, and I like to keep the windows open so that I can hear the sounds of the motorini, distant hammering, the soccer ball kicking around the courtyard and the sounds of plates clattering. I am wondering if I will be able to incorporate those sounds into the paintings I am beginning.

Whatever one might say about the great sun and light in Israel, I can now personally vouch that it is way over-rated. Just too much of it all the time, never changing, and just too hot.  So hot that it bleaches rather than burns, in my opinion, so that if I had stayed any longer I may have disappeared.  And who wants to feel sticky all the time, from breakfast to dinner? I was once talking to a taxi driver in Israel as we were going from Rehovot to Jerusalem, and he said to me that he loves the heat and sun of Israel, “The hotter the better.” And this he says as we are sitting in sub-zero temperatures of the air-conditioning he has cranked up in his car, for that is how much he “enjoys” the hot weather. 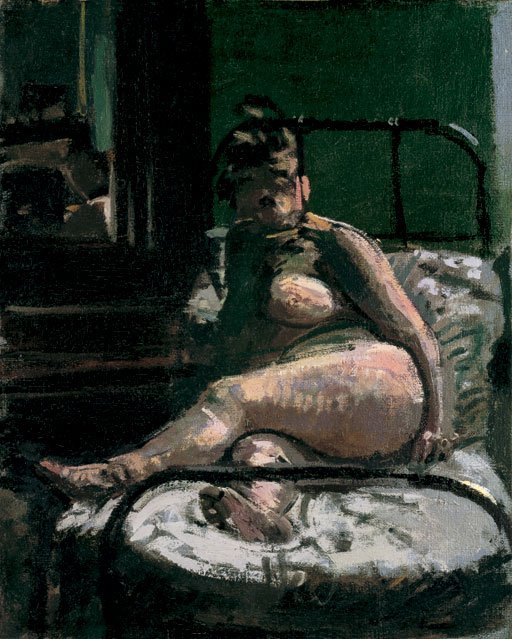 The weather in Naples is changing now from summer sun to autumn rain, and as I make my way around the city to see the different Caravaggio paintings and erotic frescos, it made me think about the work of Walter Sickert (31 May 1860 – 22 January 1942). A German-born English painter and a member of the Camden Town Group, Sickert often favoured somber colors and ordinary people and urban scenes as his subjects, and his works were considered very controversial, even connecting him to murder. He is considered a prominent figure in the transition from Impressionism to modernism, and I can see how he might have been an important influence on certain British painters, particularly Lucian Freud and Francis Bacon and even the young Jenny Saville. 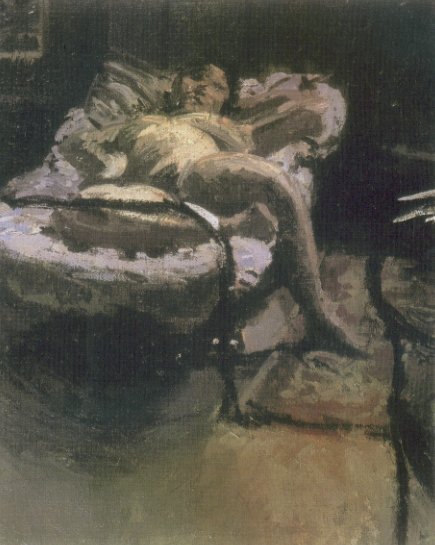 I personally think that his nude paintings are his best works, but I have included here below as many as I could find.  Following Degas’ advice, Sickert painted in the studio, working from drawings and memory as an escape from “the tyranny of nature.” His oeuvre also included portraits of well known personalities and friends, as well as images derived from press photographs. Continued biographical information on Sickert is available here on WetCanvas, and here on Wikipedia.

As much as I do like looking at “dark” paintings from time to time, I don’t particularly revel in them; a good dip down now and then though provides some variety, something I do vastly appreciate, like an enormous platter of antipasti. And of course, Napoli itself. Today I took advantage of a questionable sky and brisk air to explore the neighborhood of Chiaia, with occasional jaunts into alluring doorways and enticing stairs going up up up, ending with an inhalation of sun, salt and surf along Naples’ Riviera.